– Foundress of the Religious of the Assumption
“Jesus Christ brings a liberation that transforms society.” 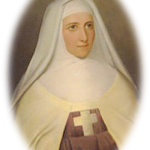 Marie Eugenie Milleret de Brou, foundress of the Religious of Assumption, was born on August 25, 1817 to a wealthy father and a respected member of the Parliament; and a mother who was tender but firm, gentle and energetic. Madame Milleret developed “those natural virtues” like honesty, integrity, courage, self-control, and a certain spirit of renunciation in her children. With them, she visited the poor and the sick of the neighborhood. Anne Eugenie spent a comfortable life in their town house in Metz on the spacious estate of Preisch which provided her the freedom to play and made her taste the joys of nature. The children spoke and wrote German and French fluently, and they were open-spirited in their studies. They received solid teaching and great during her adolescent years, she was marked by the death of her siblings, financial reversals, separation of parents, and the death of her mother. 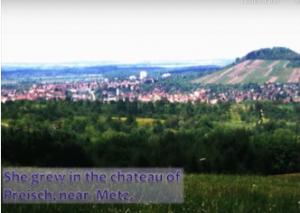 Her personal history was also marked by a period of historical and social upheaval. New philosophies challenged traditional understanding of human thought. The new scientific method and mentality gained ground and shaped minds, sharpening the conflict between science and faith. Industrialization was beginning to transform not only the economic structures but also the lifestyle of society and politics. France discovered the power of popular movement, with new ideals of liberty, equality, and fraternity shaking the foundations of the structures of society: its government, social order, economy, education, and its Church. Anne Eugenie wanted to be part of the new and evolving world and find her own place in it.

In her own words, “Daughter of a family unfortunately without religion, brought up in a social circle which was even less so, left motherless at fifteen, … I was brought up in an unbelieving family that belonged to the liberal opposition to the Restoration. My mother, however, wished me to be a Christian, and her great and energetic character led her to imprint upon my education a character of renunciation which always seemed to me more Christian than many forms of religious education.” 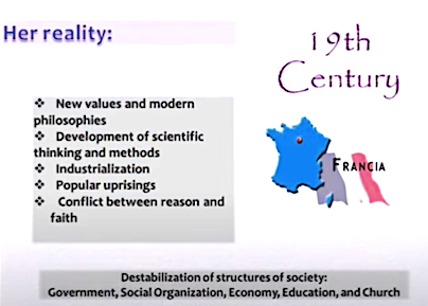 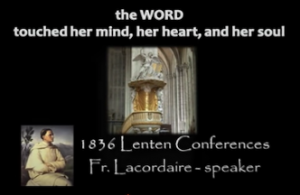 In 1836, she underwent a radical conversion while listening to a Lenten sermon of Abbe Lacordaire at Notre Dame de Paris Cathedral. She wrote to him, “Your words gave me new generosity, faith that nothing would ever be able to shake again. I was truly converted to give all my strength, or rather, all my weakness to this Church which alone, in my eyes, had the secret and the power of good on this earth.” 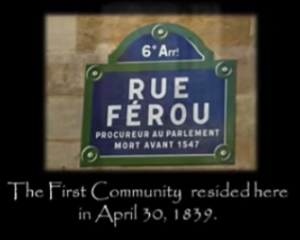 On April 30, 1839, Anne Eugenie founded the Congregation of the Religious of the Assumption, taking the name – Marie Eugenie of Jesus. She founded the Congregation for two essential reasons: because God wished it, and because the Church and society needed to form deeply Christian women, with a passion like hers for the Gospel, women capable of influencing society and family in Gospel directions. Her faith gave her not only boldness but also endurance, not only the energy of action but also the strength to carry it out in the face of misunderstanding and opposition. Her faith and her love for Jesus Christ were for her a source of unity. She kept her gaze fixed on her goal. Marie Eugenie understood that she could practice the Gospel law of love through education. For her, educating means to make Jesus Christ and His church known and loved, and thus extend His Kingdom for the glory of God and the happiness of humanity. Education consists in developing each person’s talents and gifts, so that the person grows in liberty, goodness, honesty, straight-forwardness, tact, simplicity, courage, generosity. She looked upon her time with hope and considered that the world was a place of the revelation and glory for God. This way of looking at the world impelled her to love it better. She believed in the social consequences of the Gospel and its power to transform society. It was her reflection on her own experience, on the need of her time, as well as the growing split between faith and reason that led her to choose education as her response to the challenges of her time.

Today, the Religious of the Assumption and their lay partners continue her work, faithful to the founding inspiration and attentive to our world’s reality, that of our societies, and of our Church. They contemplate reality in all its dimensions – people, society, the world – to be able to discern everything that favors life and leads to an ever greater hope in God, in humankind, and in society. It is to understand that God has a plan for the world, that each one is called to partnership in it. 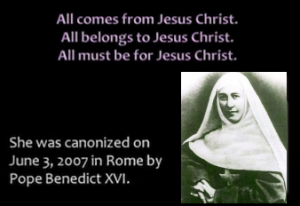 The humble path marked by Marie Eugenie is one of joy in becoming ever more disciples of Christ in every facet of our being, joy in spreading the Kingdom in oneself and in others. A path which is simple and demanding.

In 1965, the Church recognized her way to holiness. Pope John XXIII solemnly declared the veracity of her virtues. Pope Paul VI beatified her on February 9, 1975. On June 3, 2007, Marie Eugenie Milleret de Brou was canonized a Saint by Pope Benedict XVI at St. Peter’s Square in the Vatican City. A woman of faith and vision, she now belongs to the whole Church.