Metta Musical Theater (MMT) Club is a co-curricular program. Students from Grade 3 up to Senior High School join this club. They develop and express their gifts in singing, dancing, and performing in their weekly classes with a yearly showcase or performance. Metta Musical Theater has staged Broadway songs and dances. In the recent year, the themes of the MMT shows were about taking taking of the planet, human connections, and love for one another. 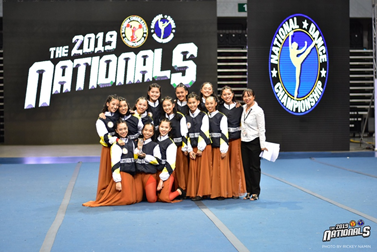 MDT is the touring dance company of Assumption College. Its style is predominantly Modern Contemporary (with the techniques of Horton and Graham) with cross-training in other disciplines Ballet, Street Dance, Hip Hop, Jazz and Neo Filipino. Students train after school for two hours daily in the different dance genres. Membership is by audition.

MDT first began in 2006 when a group of students travelled to Tianjin, China for a festival of song and dance. The following year, that same troupe performed at the Sala Nervi in the Vatican for an audience of 7,000 pilgrims attending the canonization of Assumption foundress St. Marie Eugenie of Jesus. In School Year 2008-2009, MDT embarked on a national tour performing at the St. Louis Theater in Baguio City, Assumpta Tech in San Simon, Pampanga, Assumpta Theater, Antipolo City and The Mall of Asia, Pasay City.

Creatives > Metta > Venues Rehearsal Room Located underneath the MRA stage, the rehearsal room shares the same dimensions as the stage itself. It is ideal for practices and blockings before the actual use of the auditorium. The air conditioned room also has mirrors on...

Creatives > Metta > Venues Ballet Room The ballet studio, located a few steps away from the auditorium is at the 2nd floor of the Sports Complex. The room is ideal for dance lessons/rehearsals for no more than 20 persons. It is with ceiling to floor mirrors on one...

Creatives > Metta > Venues Mother Rose Auditorium The MRA is an impressive 1,011 seat theater with a proscenium stage. It boasts state of the art sound and light technology, a stunning layout of the orchestra, balcony and parterre boxes, outstanding acoustics, an...

Dr. Angela Fabiola Regala officially took her Oath as the 10th President of Assumption College during her Investiture Ceremony held last August 26, 2020. At the momentous event, this was speech she gave.

A personal message from former president Dr. Carmen Valdes | Today, May 31, 2020, is the last day of my term as president of Assumption College San Lorenzo. It has been my honor and privilege to have served you in the best way I knew how.

Editorial Statement on Extra Judicial Killings | We have seen in the past six weeks a laser-like focus on the need to rid the country of the scourge of drug addiction. We know the pernicious effect of drugs – on the individual, on the family, on the community and on the country as a whole.

Editorial statement on former President Ferdinand Marcos’ ‘Hero Burial’ | I believe that every person no matter what they have or have not done in their lives deserves respect even in death. However, to be buried at Libingan ng mga Bayani affirms that those buried there were indeed heroes. And there’s the rub.

An article from peopleasia.ph | “People always say that I’m outside the box. I’m very innovative, I’m very creative, I want to move things forward, I want to break the walls of Assumption, I want to be much more holistic … Let’s put it this way; I want to embrace and expand what Assumption San Lorenzo does,” Pinky shares.

An article from lifestyle.inquirer.net | Dr. Carmen Lourdes “Pinky’ Valdes, a former nun, is AC’s ninth president and the first lay leader to steer the nearly 60-year-old education institution known for producing alumnae who blaze trails in government service, the arts and business.

Published on opinion.inquirer.net by Rina Jimenez-David | The “Parliament of the Streets,” the series of protests, marches, organizing meetings, symposia, even fashion shows, concerts and comedy acts that marked the post-Ninoy Aquino assassination period, will always be remembered as the political “coming out” of the Filipino middle class.

Assumption President promotes confidence-building, leadership, and the balanced use of social media

Judgment is not the intent here, but simply to ask for respect for the historical facts and the will of the Filipino People clearly demonstrated in the People Power Revolution of 1986.

Education is the Best Answer (the others are short-lived)

St. Marie Eugenie, our foundress, grew up in a revolutionary society very similar to ours. She was convinced that only education can bring people to transform themselves and society.

Feature at People Asia | All her life, Pinky has had a unique way of looking at the world. “I believe life is much better than people think,” she explains. “I always like to look at the whole picture because you’ll see that there is more positive than negative.”

As we mourn the deaeth of Kian, we mourn with cries for due process and justice in our country. In the face of such injustice, we join our voices with our colleagues in many academic institutions who stand by the truth: “we are our brother’s keeper.”

A Letter to AC Teachers and Students

To students I say: be a “Horatio” for each other. See the nobility in the heart of your classmate and in your teachers and parents, too. To teachers I say, it is our call to see beyond the “shell” of fear and confusion in our students; and with tenderness, nurture the nobility in every student’s heart.

A Voice for the Pre-Teens

We, as a school, are dedicated to the developmenet of the young – we should always speak and stand for the rights of the children and pre-teens. Be their voice wherever you are.

Keep this in mind the next time you are about to repeat a rumor or spread gossip. “Take a moment to filter what you’re going to say. The first filter is Truth; the second is Goodness, and the third is Usefulness.”

On my way out, after I received his gift, I was ready to step out already when he held my arm and said, “Wait. Please let me give you a special blessing. I want you to know I am with you as you face trials in your ministry in your diocese.”

Admission Admission Requirements The following documents shall be secured by the admissions office prior to enrollment. These documents shall be endorsed to the records office with an accompanying signed receipt at an appointed time:   Original PSA birth certificate...

Admission Application Requirements Any qualified individual with a bachelor’s degree from a college or university may apply for Admission to the Graduate School. The original transcript of records from the university/college graduated from is required. Applicants...

Admission Welcome Dear Applicant, Thank you for considering Assumption College for your graduate studies. I am certain that you will realize many, if not all, of your potentials during your stay with us. The Graduate School is open to women and men and carries a proud...

In order to ensure the total development of Assumption students, the College provides and implements student personnel services which promote growth of persons-in-community, develop leaders, and foster an environment of mutual trust and respect, concern and freedom in the campus.

The Guidance Program aims to serve the needs of individual students in terms of holistic growth and development. It is designated to assist the student in adapting to life challenges, decision making and developing a sense of service so that in turn, she may contribute to the growth and development of others in the community in which she lives.

The STUDENT ORGANIZATIONS AND ASSOCIATIONS are learning extensions, venues for practical application of theories learned in the classroom. They are not only co-curricular in nature but are oriented towards service to the school and the bigger society.

The Center for Social Involvement (CSI) was established in 1975 as a center for Assumption students seeking a more meaningful and relevant education. THE CENTER for SOCIAL INVOLVEMENT aims to: Conceptualize, propose, and implement programs for the development of the social awareness, commitment and action of the school community.

The FSF Center envisions a community of unique persons empowered by and delighting in a spiritual adventure with God.

Meals and snacks are available for sale in the Commons (canteen) and food booths located at strategic places. They are open to accommodate the students during their recess and lunch breaks during school days.

The Milleret Bookstore is open on weekdays from 7:30 a.m. to 4:00 p.m. The School community may purchase books, uniforms, and school/office supplies during these store hours.

The Assumption College dormitory is a housing facility for students. A student’s admission into the College Dormitory means that she observes the policies and rules. The Dormitory Administrative Team reserves the right to institute sanctions, or separation from the dormitory. Students assume the responsibility of abiding by the guidelines set in the Dormitory Handbook.

The Marie Eugenie School for Innovative Learning is a progressive concept in tertiary education, conceptualized for the purpose of harnessing the qualities that create highly skilled educators, communicators, psychologists, interior designers and practitioners in the performing arts as trailblazing leaders.

Assumption College uses cookies to ensure you get the best experience while browsing the site. By continued use, you will read to our privacy policy and accept our use of such cookies. READ & AGREE